52 Ancestors: Week 4 - I'd Like to Meet John Wellington McDonald


This week's 52 Ancestors prompt is "I'd like to Meet". I have more than one ancestor I'd love to sit down with:


The person I'd like most to meet though is my great grandfather John Wellington MCDONALD. He's been my biggest brick wall, and I'd love to find out more about him. It frustrates me to no end that the man who my surname comes from is the one I know the least about. Every bit of information I've got on him was hard won. All records I have about him state he was born in Ontario. Somehow between 1922 and 1925 he went to Nova Scotia and met my great grandmother, and ran off with her to Ontario. My sadly short time line pertaining to John is as follows.

14 June 1894?
John's marriage and death registrations give birth calculations of 1894 and 1896. I have not been able to find a definitive birth registration for him.

1 August 1932
My great aunt Pauline MCDONALD is born somewhere in Ontario. The date of birth came from her death registration.

14 November 1934
Pauline dies of the flu in Toronto, Ontario. John is in the informant on the death certificate and stated he was born in Ontario.

25 June 1935
John and Edna have a still born baby boy in Toronto, Ontario. Jack stated he was born in Kingston, Ontario. 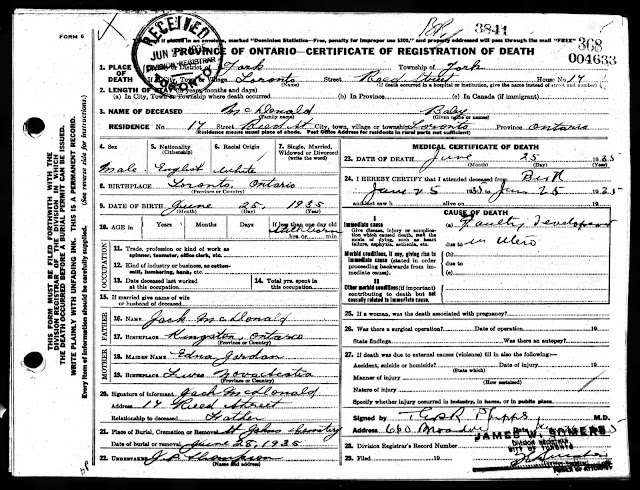 19 March 1956
John and Edna finally decide to get married. I'm not sure if the late wedding had to do with pension concerns, or if it was because of Edna's second husband. A death certificate for Adolphus FREDERICKS has never been found. John states he was born in Ontario, and the son of John Angus MCDONALD and Mildred MURPHY. He states they are immigrants from Ireland. John also states he is a bachelor.  Information obtained from their marriage registration. 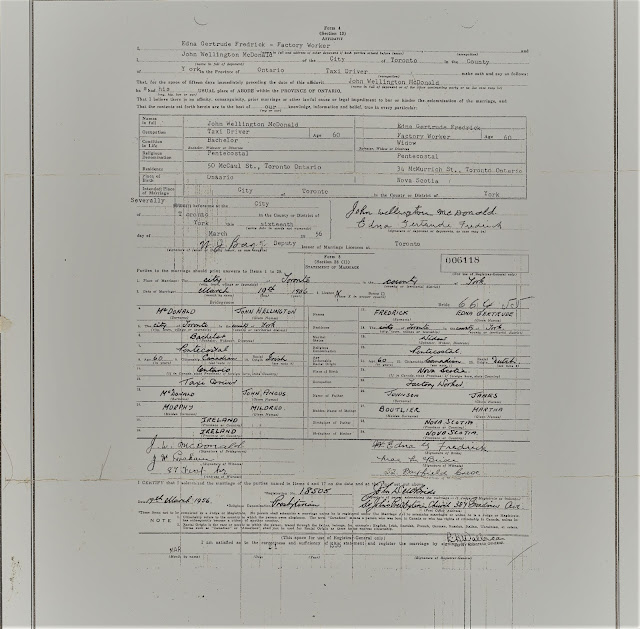 1958
John is a taxi driver, and the family has moved to 415 Christie Street in Toronto, Ontario. Obtained from Ancestry's Canada Voter's Lists collection.

5 February 1964
John dies in Greenacres Nursing Home in Newmarket, Ontario.  Information obtained from John's death certificate. Edna was the informant, and stated that she did not know his parents' names, only that they were born in Ireland. Which says to me she never met them. 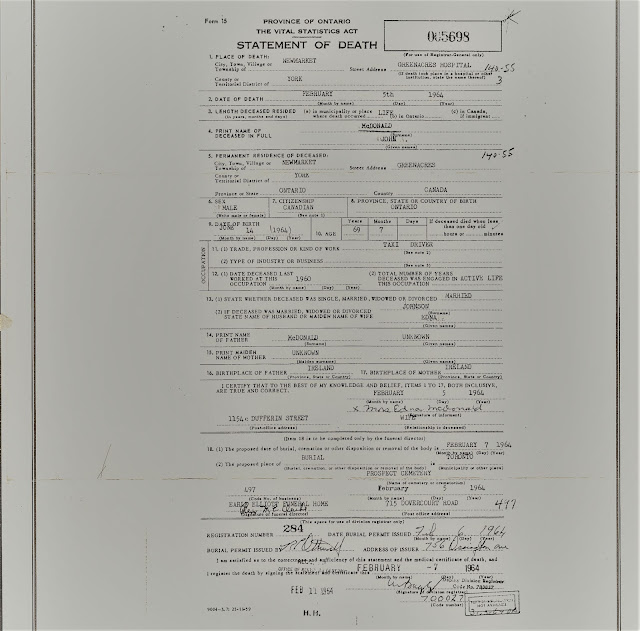 Unfortunately his obituary in the Toronto Star does not give any information either.

In summary, this is what I have about John:

The information I have about John was obtained from the following record sets:

Interestingly enough, there is a John Wellington McDonald born in Nova Scotia in the 1870's. He is NOT my John however. Firstly, this John was born about 20 years before my great grandfather. Secondly, once I "killed him off" Nova Scotia John, I found that he married someone else, and is buried with her in Nova Scotia.

My next steps to find out more about my tight lipped ancestor John:


If your family tree has a John MCDONALD that you think might be my great grandfather, I would love to hear from you. My contact information can be found on the Contact Page tab.
Posted by Candice McDonald at 12:04 No comments: 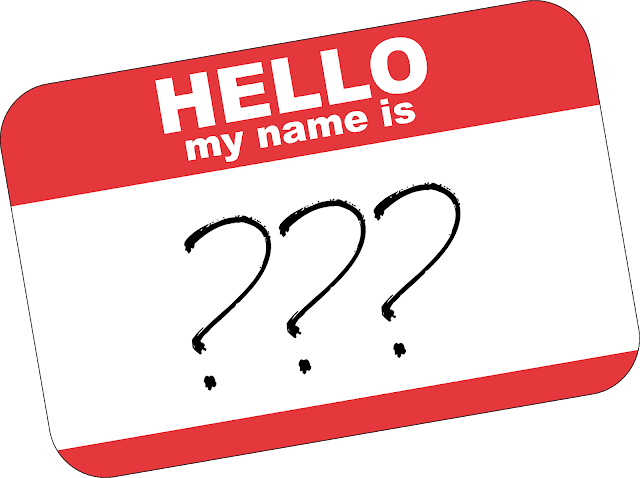 This week's 52 Ancestors in 52 Weeks prompt is Unusual Name. I have not been blessed in my own research with many unusual names. My maternal French Canadian side has a fondness for the names  Joseph and Mary/Marie that borders on the ridiculous. My paternal side has heavily favoured the names James and  John. My recently discovered Scottish MacArthurs are starting to look like they feel strongly about the name Dougald.

Unusual Names I've Comes Across
Posted by Candice McDonald at 13:59 No comments:

Email ThisBlogThis!Share to TwitterShare to FacebookShare to Pinterest
Labels: 52 Ancestors

52 Ancestors: Week 2 - The Challenge of Organization: Forms and Charts


This week's 52 Ancestors in 52 Weeks prompt is "Challenge". I have two great grandfathers by the names of John MCDONALD and James DOUGLAS that are challenges. I have yet to find which cabbage patches they came from. My biggest challenge however, is organization. I'm sure I'm not alone on that one, so I've decided to make my challenge post about forms and charts.

Once you start getting deeper in your family tree, being able to keep track of what you've looked at, what you have, and what you need to find becomes essential. Especially if you're like me and do the old school paper thing for at least some of your ancestors. I keep paper files of my direct lines. Collateral lines are kept on my Ancestry tree. I've built a little collection of links that I like to use to to find my forms.

Ancestry
Ancestry has a form for just about anything you might need for your research files.

Family Tree Templates.net
This great site has a ton of varieties of forms. They are free to use, though if you want fillable PDF versions for some of the forms, you'll have to pay a small fee.

1916 and 1921 Canadian Census
I cannot remember where I first found these. Global Genealogy is in the main URL, but I could not find a way to find it on their main site now.

Posted by Candice McDonald at 12:22 No comments:

Amy Johnson Crow has started a new year of her 52 Ancestors in 52 Weeks prompts. Each week for 52 weeks, Amy gives a theme for participants to write about your family history. You don't have to be a blogger to join in. The point is to get yourself writing abut your ancestors. My blog focuses on more on record sets than on my personal family history. Because of that, my blog posts will try and feature Canadian record sets tying into the prompts, rather than strictly on my personal research.

This week's prompt is "First", so I'm going to look at the first census taken in Canada. The first major census in Canada was in 1851/1852, but that's not the first census taken. There was several small censuses done in the 2 centuries before the 1851/1852 census. Library and Archives Canada's finding aid on early Census records states they have records going back to 1640 onsite, and is described as "notes on Montreal neighbourhoods". The earliest nominal census return is from 1666. Many of my ancestors appear in this census, as I am the 11x great granddaughter of Louis Gaston Hebert, who came to New France first in 1606. He went back to France, and came back with his wife, Marie Rollet, and their 3 children to settle permanently in 1617. Thanks to a small population, and intermarrying, I also descend from several of the first few waves of settlers in New France. For simplicity's sake, I'm just going to look for the direct descendants of Louis.

You can find the digitized 882 images of the 1666 census here on Hèritage. This census is almost a work of art. The handwriting is beautiful, and you can read each page clearly. It is in French of course. However, you will not need an advanced knowledge of French to be able to read it. The first few pages comprise of the names of the men and women who lived and worked in the seminary and hospital. After that they list those families in the surrounding area. The wonderful and unusual thing about this early census is that it lists all members of the household. As well, married women are listed with their maiden names, a common practice that French Canadian researchers benefit from. Unmarried, or those with spouses still in France, are listed under a special heading. Take a look at this sample page:

The areas covered are:

If you are finding things hard to decipher, don't despair. There are two published transcriptions of the census on Internet Archive here and here. The nice thing besides the clarity on Internet Archive is the fact than you also use their search bar at the top right to search for specific names. A word of advice though if you try the search function: Use as many variations on spelling as you can think of.

Louis and Marie have passed by the time of this census, and so has my 10x great grandfather Guillaume Herbert. My 10x great grandmother, Helen Des Portes, has remarried to Noel Morin. They can be found in St. Jean, St. Francois and St. Michel:


What I find really interesting is how many of these surnames are still in existence 350-ish years later. Not only still in existence, but well known and common. In my non genealogy job I see some of these surnames quite often in northern British Columbia, some 5,000 or so kilometers away. Some have been anglicized in pronunciation, but you can still see the French surname they originated from.

If you would like to explore more of the pre-1851 census records, be sure to check out the LAC Finding Aid on early census records.