For those of you who subscribe, I've moved the blog over to Wordpress. I've managed to bring over all my old posts as well. You can find the new blog location at

Hope to see you there!

Posted by Candice McDonald at 16:05 No comments:

Working for the Government: Federal Civil Service Lists on Canadiana

The machinery of the federal government runs on more than just politicians. There are thousands of people in various government departments who don't make speeches and don't lobby for votes. I'm talking about people such as clerks, surveyors, light house keepers, toll agents, and inspectors. If your ancestor was a cog in the machine of the government, you'll want to hop over to Canadiana and check out the civil service lists available on there. There are various years available. The majority that I found fell between 1882 and 1918. I did however find one from 1871. 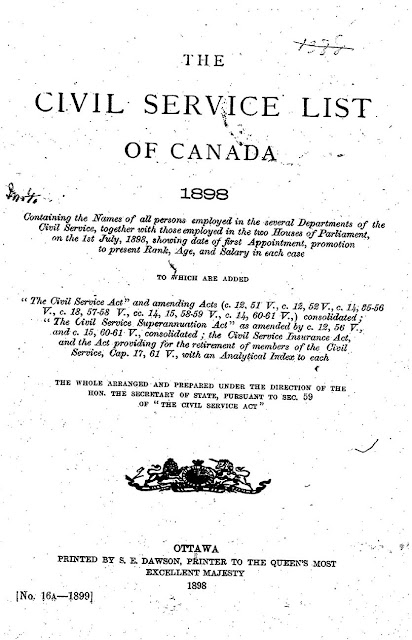 I love Canadiana. It has such a huge amount of digitized material. The amount of material does make searching a little difficult though. Putting civil service list of Canada resulted in over 16,000 results. And that's after limiting the results to English ones! Obviously, there aren't 16,000 civil service lists, as they only came out once a year. At the end of this post I've tried to wade through and provide the links to as many years as I could to help you out.

To give you an idea of just how many departments make up the federal government, here is the index of departments for the year 1910 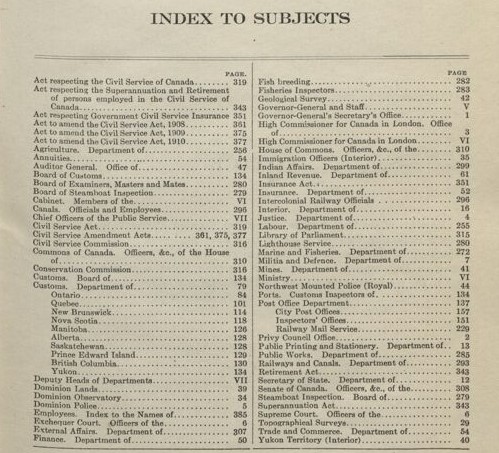 These lists have some surprising information in them. Through the various issues, I found information such as

The date of birth is especially exciting. It's an actual date, not just a year!
Here's the list of Registrars in the Northwest Territories in 1900. A Mr. R. F. Chisholm wore two hats, as he was also receiving an extra $500/year as a Dominion Land Agent for Battleford Saskatchewan. 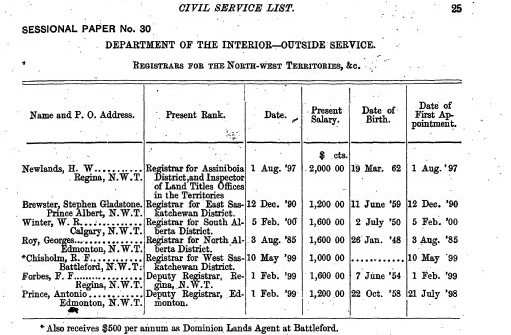 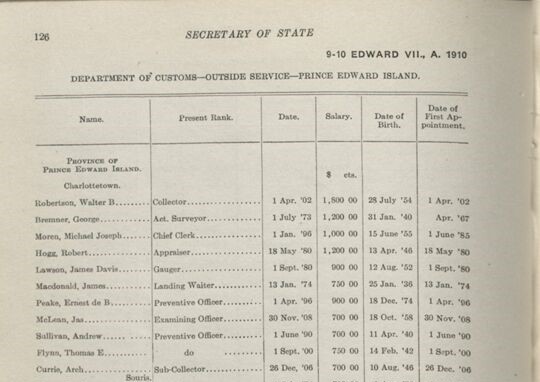 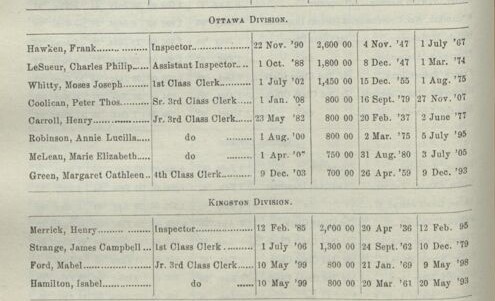 This one from 1871 has different information. It shows Name/Origin/Creed/Position/Salary. 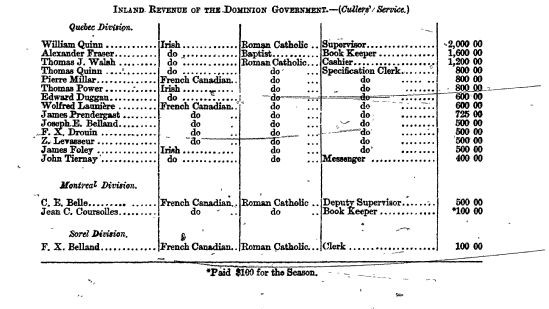 If you're worried about having to wade through hundreds of pages, there were name indexes in the issues I looked through. Here's a page from the 1886 issue 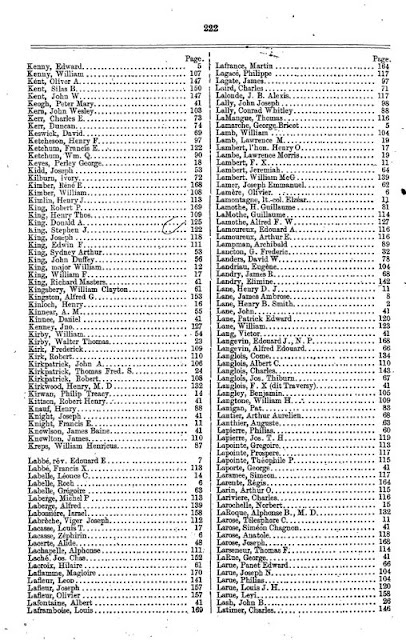 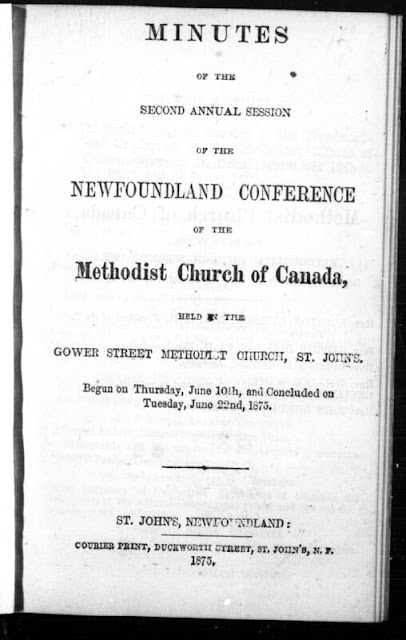 Now I know this doesn't sound like a very exciting resource if you're not a religious scholar. But there is good information to be found in this collection. For instance, did you lose track of what happened to Charles Pickles? Well according to the 1875 Conference, he left to become part of the Missionary Committee in London.

If you're looking for names, the first half of the conference minutes is where you want to look. They were very thorough in listing who had become full fledged ministers, and who was working their way through the levels. Here in 1876 is the list of those who have been "admitted into full connexion", and those still hoping to attain it. 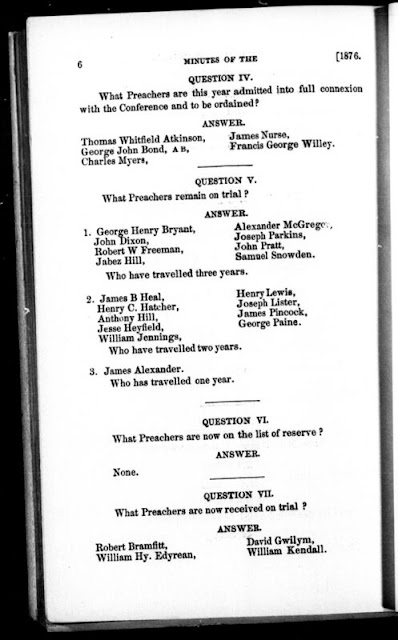 Deaths were also recorded. Here is one recorded in the minutes of the 1877 Conference. It gives so much information to follow up on in just one short paragraph! 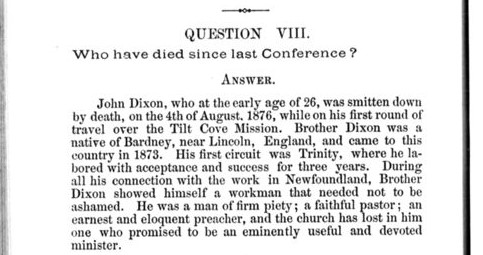 If you're interested in the works and general details of the Methodist Church in Newfoundland, then the second section of the Minute Books will be of interest. In here is general information on the size of circuits, and the number of marriages and baptisms performed in each. Here's the total for the St. John's and Carbonear Districts in 1877. 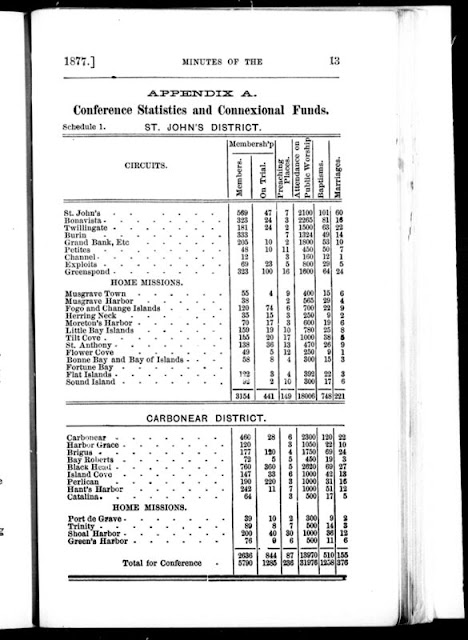 There are also reports of Committees throughout the second half. Even in these you will find names scattered among the reports. Here in the disbursements of the Contingency Fund in 1879, Bros. Parkins and Bryant were given money for their "afflictions" 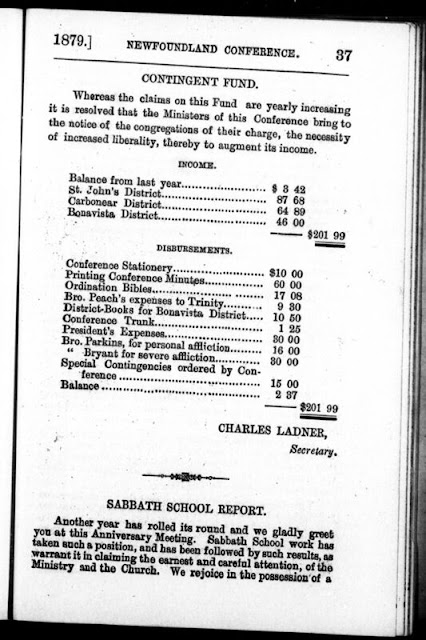 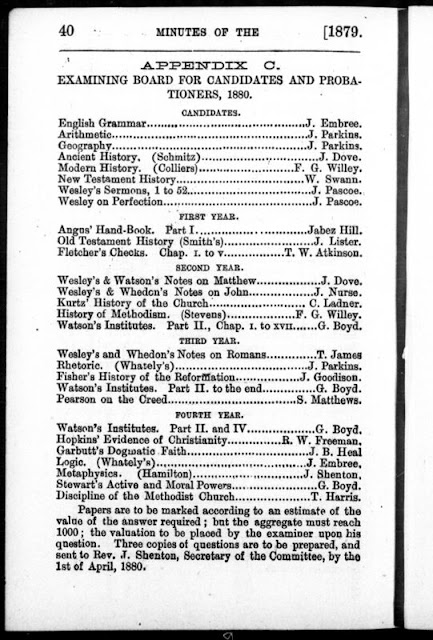 As a last example, here's a list of people who subscribed or donated to the Bona Vista Circuit in 1878. 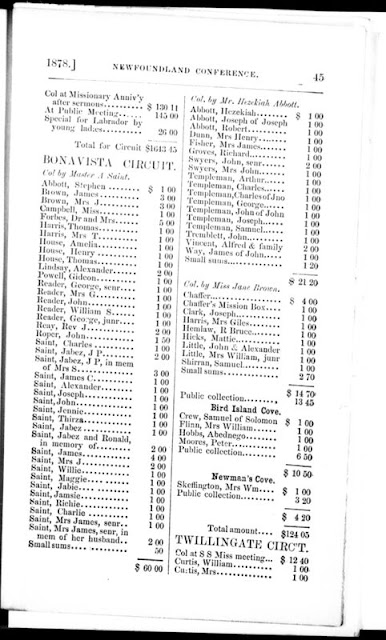 While you're at it, also check out the Annual report of the Auxiliary Missionary Society of the Newfoundland Conference. These also have to do with the Methodist Church. There are 5 issues:

Posted by Candice McDonald at 17:47 No comments: