Genealogists are taught that we must be able to back up our conclusions with proof. Ideally, we should have three different sources to prove our assertion. The best sources are of course civil registration and church records. But what about family stories?

On the surface, family lore is not a wholly reliable source. Over generations, the story changes bit by bit. Did you ever play the game "Broken Telephone" as a kid? It was when everyone sat in a circle. The first person would whisper a sentence in the ear of the person to the right of them. Then that person would whisper what they heard into the ear of the person to their right. Around the circle you'd go, back to the first person. When you compare what the last person heard to what the first person said, the sentence had changed. Family lore is like that. Each successive telling of the story changes the story a little bit.  Most often, it is the military years of an ancestor that grows into heroic deeds. Sometimes it has to do with the activities of a "black sheep" ancestor.

In my own case, the story centers around the parentage of my grandfather, Henri GOVEREAU. This story takes some twists and turns, so bear with me. I had been told that he was orphaned very young, and brought up by the GOVEREAU family. As a tribute to them, he took their last name as his own. The story was that his real last name was MCKENZIE. So I set about to prove this. My first step was to locate him in census records, which I did. In 1911 he is living with his mother Mary, sister Annie, and cousin Jeremy. He is living with them and several other family members in 1901. Next I find a record of his marriage to my grandmother. I found this at the Provincial Archives of New Brunswick (PANB) for free download. 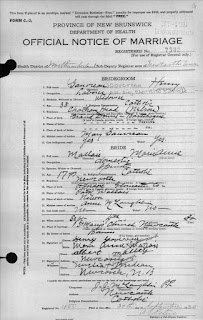 Now, if you'll notice, he has Mary GOVEREAU listed as his mother, but he states that his father is unknown. I thought this rather strange. Since he is Catholic, I then hopped onto Ancestry, and checked the Drouin Collection for him. Up popped his baptism, which states:

"On the 4th of July,
1892, the undersigned baptized
Henry, one month and twelve
days old, illegitimate child of
of Mary Govereau, the sponsor
being Olivea Gotereau, nee Savoy"

In addition, listed in the margin of the record, is the dates of both my grandfather's marriages, so I knew I had the right person. Well, I thought, that's that. He wasn't adopted. Catholic records are pretty thorough, and if he was adopted, it would say that. Illegitimacy is not a big deal these days, but back then it probably was, I thought. The story was conceived to hide it. Whether by my grandfather or by his mother, I didn't know. I also wondered briefly where they pulled the last name MCKENZIE from, but dismissed it and went on from there. I get back to Henri's grandfather, also named Henri GOVEREAU. He suddenly appears in my ancestors area of Tracadie, New Brunswick in the 1840's, marrying twice. He is not connected to the Govereau family already established there. Census records indicate he was born in Quebec, but I could not find a connection to the various spellings of Govereau there. One tantalizing hint in his first marriage record states that his parents are the deceased Joseph Govereau and the deceased ---- Michaux. In the Quebec Drouin on Ancestry, I found a marriage between Joseph DENEAU and Rose MICHAUD. I could not find any connection to them and Henri. I come to the realization that Henri is not on the up and up of what he appears to be. I'm fairly new to genealogy back then, and become frustrated. I set Henri aside and pursue easier branches.

Flash forward ten years to just a few weeks ago. I'm much more experienced at researching and learned some new tricks. So I decide to take another look at Henri Senior. I go onto the PANB and take a look at the Monseigneur Donat Robichaud database. The Monseigneur was an avid and well known historian and genealogist of the northern New Brunswick area. The PANB has his database online and available for free to look at and download. I look up Henri Senior in the database, and found out the Monseigneur has compiled a lot of information on him. It turns out that yes, Henri was not who he appeared to be. Long story short, Henri was a bigamist born in Quebec as Germain DEVOE. He married and abandoned his wife and young daughter in Boston, making his way to the Mirimichi. In supporting documentation, Monseigneur Robichaud lists a baptism from a record group I have not seen before, the register of Burnt Church (1844-1890):

This baptism coincides with the birth of Annie GOVEREAU, my grandfather's sister. Annie is also listed as illegitimate, but did you notice the name of the father? William MCKENZIE! If you remember, the family story is that my grandfather's real surname was McKENZIE. After this many years, I think the only way I could prove that Henri is a McKenzie is a through a DNA testing. But there are only 5 years difference between Annie and Henri's baptisms, so it is a possibility that William MCKENZIE fathered both of them.

So don't dismiss your family lore! They say (whoever "They" are) that every rumour has a kernel of truth. The same holds true with your family story. Write those stories down, and then go about proving them. It may take awhile to unravel the truth. It took a decade and some serendipity for me. But don't get discouraged. The "high five" moment will eventually come.
Posted by Candice McDonald at 09:13